After a little while…some update. My sewing/embroidery machine is back home from service..yeaaahh..
So I can start another fun idea. Not that I haven´t enough other fun projects, but the ideas are coming in faster than I can sew 😉 Right now are 3 circling in my mind.
So that´s what happened until last time..
block 7 is ready prepared for stitching, the filler triangels – 4 of them – are prepared and nearly ready for stitching…big step forward! Next step will be the corner triangels and then the „big sew together“ can start. The border is in the thinking state..but a picture is already entering my mind…I have to get rid of the other 3 ideas and give space to it 😉
I started another project on my „play day“ and used my Accuquilt go die for the 8″ circles. It´s also great for using all my left overs…right ..scraps 😉
7 Quilts are waiting patiently to be quilted
My „ballet…“ Quilt is taking shape too. first Rosette nearly finished…this is an EPP project, so nothing fast…but as it´s a hand stitching project it´s good for watching TV in the evening and get something done.
„the people“ Quilt is on it´s way to Birmingham Quilt Festival in August, and „A traditional modern Wedding“ is soon going too to UK, but another show.

Oh..and I finally decided that the „secret Love Quilt“ won´t be finished until the deadline End of July..that would mean 2 weeks left, but I won´t make it. Life showed me enough signs I could and would not ignore. So it´s not entering the Scottish Quilt Championship, maybe next year.

And in between of all of this happens life 😉

But now some pics: 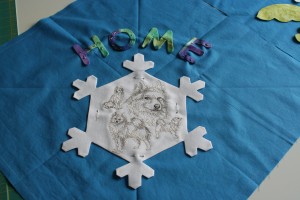 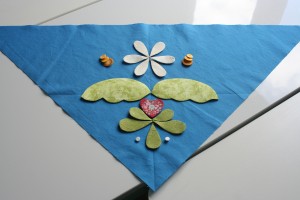 1 of the filler triangels, ready to sew on and embellish with embroidery stitches 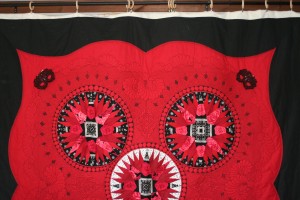 Sneak peek att the Secret Love Quilt. this is the work of 2 month quilting!
It already looks different again as I kept working on it after the picture, but I think you get a first idea of it.

Still more news to come, but it´s not official now 😉